The coast of Queensland between May and November is prime time for whale watching. Firstly they travel up to the North for breeding, and then head back South with their babies. We have seen whales right up close to Moreton Island in 6-8 metres of water. They love to show off and seem to seek attention. This, of course, also attracts sharks. In October 2011 Ryan was spearfishing off Moreton Island and came face to face with a great white shark. It wasn’t that interested in him, and just swam on by. Pretty sure Ryan had a heart attack, but also had to remain as calm as possible, being on the bottom of the ocean and having to retain his oxygen. Apparently the great whites follow the baby whales.

Here is a picture of one of many of the whales we have seen this year (sorry it’s not jumping out of the water like I would have liked it to): 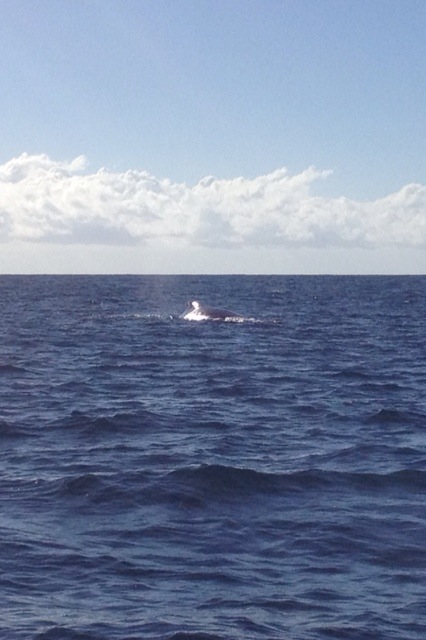 However, recently we saw a beached whale. In our recent trip to Stradbroke Island, we were driving down Main Beach, heading South along the Eastern Coast of the island. We came across this: 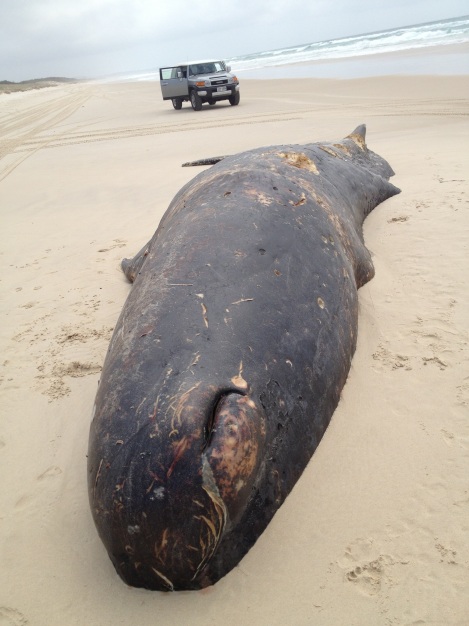 My brother informs me this is likely to be a sperm whale. It is a very sad sight to see. No one can really know how it came to be beached, but as you can see it has been nibbled on by sharks:

Did you know that sperm whales can live for more than 70 years? They are found in most oceans around the world. They have not classified as extinct yet, but are classified as vulnerable. They have the largest brain of any animal and can dive down deeper than any other mammal, diving up to 3km to hunt food. Their favourite food are giant and colossal squid. They also can produce a sound louder than any animal. It is like a sonar. Whenever we dive near Brisbane during the middle part of the year we hear a lot of whales going past. I guess that could be why.

Sperm whales live in social units, but the females keep themselves and their young away from sexually mature males (they become mature at about 4 years). A female will care for her calves for up to 10 years!!!! I guess there is a social unit missing this one. Is it male or female? Maybe someone can tell me how to tell the difference?

The ocean is such a wonderful thing with so many beautiful creatures. We rarely expect to see them in this state right up close. It was a bit of a shock when we came across this. I wonder how long it will take to decompose? There was no fowl smell when we got there, so we thought it must have been beached quite recently.

I promise I’ll write a future a post showing some of the beautiful living creatures that we see regularly. In fact, this is likely to happen quite a lot in the future. I’m a bit obsessed with turtles, and Ryan usually sees me swimming away after them. Hopefully we can get some good footage with the new GoPro when it arrives.

Here’s something nice in the meantime, taken outside of Moreton Island:

Thanks for reading
Auds