Our grand plans to get out on the bay for 4 whole days and nights were stopped in their tracks on Thursday morning. You can’t really take a motor boat out when a motor doesn’t start.

Oh well. We had a back up and still spent every day out on the bay, just not every night.

Day 1: scurfing with friends. I do have photos and videos, but they are on another camera. I’ll try to post them in a separate post soon.

This time I managed to capture Ryan’s efforts, the talented specimen that he is. Remember last time? I accidentally didn’t record him that time.

Day 2: spearfishing. The mornings have definitely become colder. We rugged ourselves up for the trip out. Luckily it warms up within a few hours of the sun coming up.

There were so many sharks in the first spot we went. This also meant there were lots of fish.

At one stage we were amongst some white wash chasing Jewfish. Ryan told me he could see the school underneath and that I should go get one.

I dove under, only to come face to face with 3 sharks. Yes the school of Jewfish were there as well, but I quickly retreated. Then I got in trouble for not shooting one.
“But Ryan there were 3 sharks right there.”
“It’s OK Auds, I was right there…. Behind you”

I DON’T THINK SO.

Next, we came across a massive school of Trevali. And I mean massive. All four of us were fully surrounded. I picked out the one I wanted. Took aim, only for Ryan to sneak in and shoot it right in front of me. That nearly started a lovers tiff right there. I then decided hanging out with the turtles for a little while would be a bit better.

The Trevali was quickly turned into some ceviche. I had a container and lots of limes to make it, fresh from shooting. We had it when we got home and it was divine! 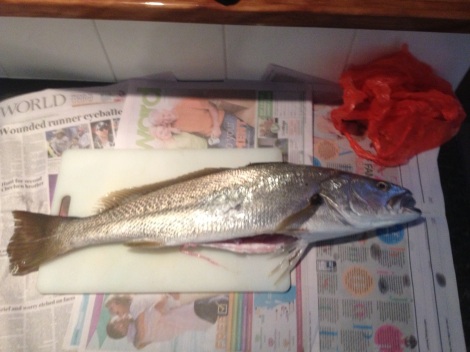 That’s a photo of a Jewfish speared by Ryan. It is small for the kind of fish, but bigger than the photo gives it credit. The chopping board underneath is actually quite large

Day 3: we found out one of our friends was staying out on the bay in his MacGregor 26. He offered us a bed and we quickly accepted.

Just quietly, the MacGregor 26 is an amazing trailer sailer to have on Moreton Bay. What a boat!

The day was spent relaxing and drinking beers at one of the best anchorages around here. 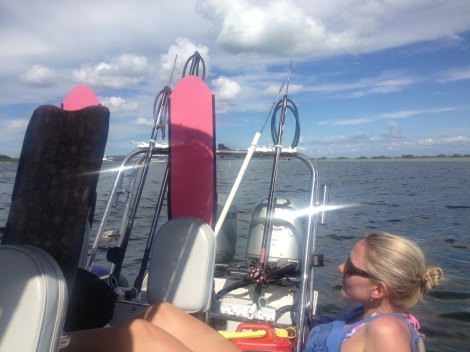 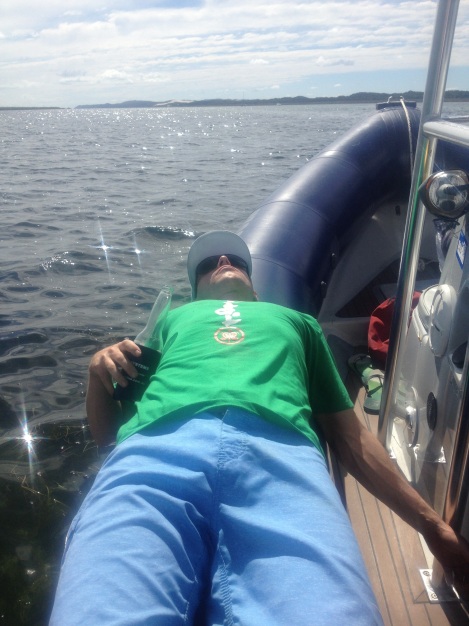 Some more of our friends showed up later in their Schoning catamaran. We invited ourselves for drinks and snacks while the sun went down. I was a little premature in putting on track suit pants in anticipation of the cooler temperature when the sun left. It took a couple of hours, so I sweltered for a while. What a beautiful evening. 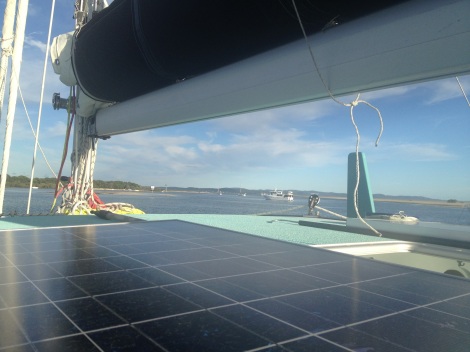 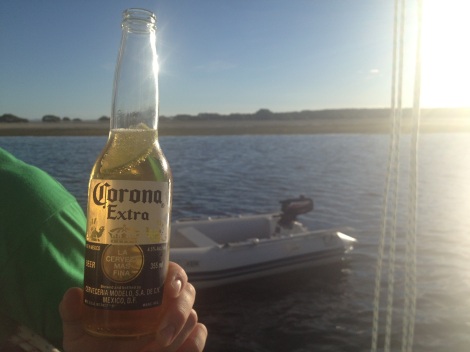 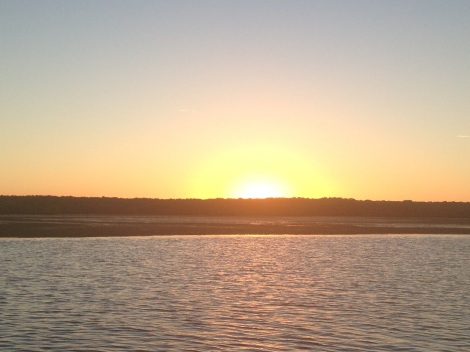 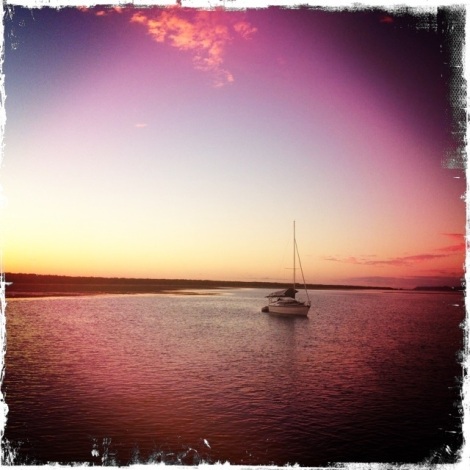 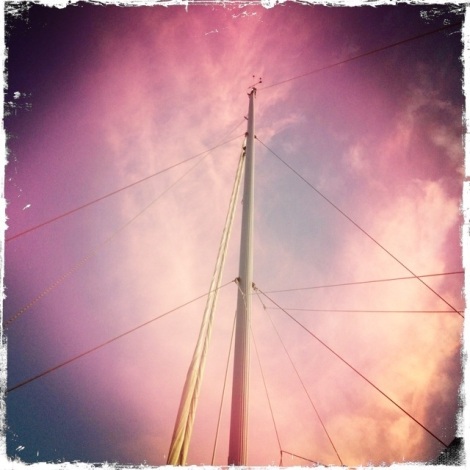 We retreated back to our boat to watch the full moon rising. I had one of those “I wish I owned and carried a decent camera” moments. So unfortunately you don’t get to see just how amazing that was.

It did not take long for us to decide it was bed time. I don’t know about you other boaties out there, but when we are out on the boat bed time always seems to be much earlier. Like, as soon as the sun goes down.

We had an early morning planned anyway. Spearfishing to be had.

Day 4: an early wake up to a beautiful sunrise. 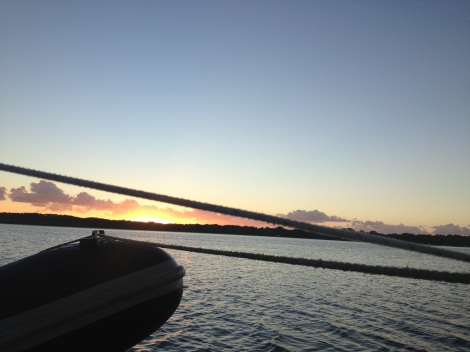 That was the view from our hatch at 6am 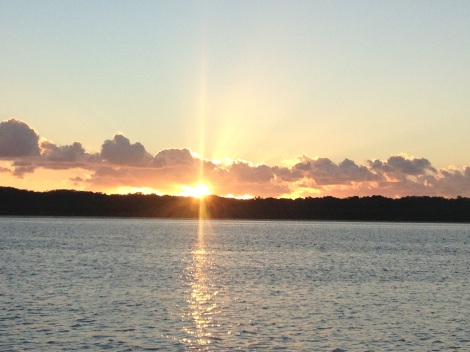 A couple of pelicans floating by with the full moon in the background: 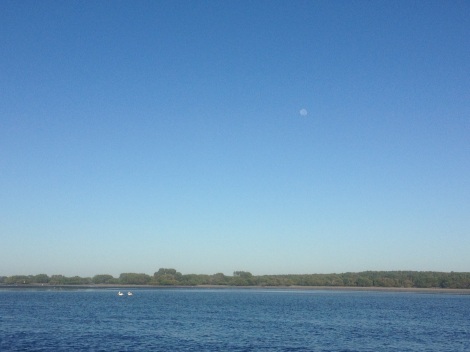 So off we went to find some clear blue open water and hunt Mahi Mahi, or maybe even get lucky with some Wahoo. The conditions looked good. Birds were circling. We even found a stray lone dolphin dancing around in the clear water. It was awesome to watch, see it dive under the boat and turn side on to check us out.

After admiring that, we decided to jump in. Unfortunately another spearing boat had been there earlier and spooked all the fish.

Back we went to some shallower, murkier water. Not many fish to be found. The catch was so unimpressive the boys wouldn’t even let me take a photo. I thought it was quite cute!!

Despite the lack of fish, I am so happy with my improved diving. I hve been diving good depths and staying down for longer than before. My new fins and weight belt are definitely a help 🙂

A fantastic weekend had, and ended with a nice fishy dinner! 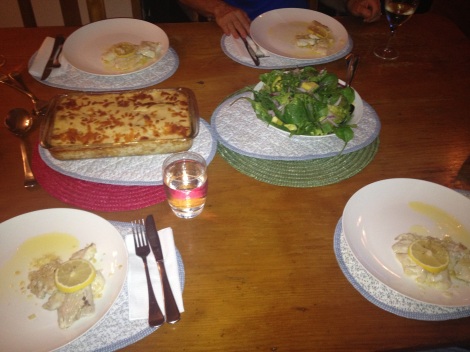 How was your weekend?

3 responses to “Making the most of it”