Sometimes being excited about the events of the next day makes it difficult to sleep. I thought this would be the case for me Friday night. I was pretty excited about going spearfishing. Not only were we going to get out for one day, but two and with a large groups of really talented divers.

The weekend started out with exhaustion. In the lead up we had to organise all our gear to be ready to drive to the Friday night briefing. This meant having all of our spearfishing gear ready (there is so much gear involved in that sport), all our food packed (making sure it was all easy to be eaten without the need for cooking or too much preparation) and all our bedding and clothes packed for staying the weekend near the launching point.

The turn out at the boat club on Friday night made it all more exciting. There were so many people we had to eat our dinner on our laps.

We heard the briefing and all the rules. The coastguard reminded us about what to do in an emergency. The whole focus was on making sure all those involved put safety first.

We were all pretty exhausted and the competition had not even started.

5am sign-on meant our beds were quickly filled and the house quiet (except for a bit a snoring from some rooms).

There is always one person who sets their alarm way too early. The house started stirring in the dark hours of the early morning and we all somehow ended up ready to go, right on time.

On our arrival at the boat ramp we realised it was good thing that we launched the boat the night before. There was a constant stream of boats waiting their turn.

Sign on of 64 competitors (32 pairs) and a quick briefing lasted until the first rays of light peaked through. The stream of boats then zipped out of the Scarborough Marina precinct heading towards the sun that slowly creeped up over Moreton Island. All in the same general direction, but slightly different angle, wanting to reach the best spots before the other teams.

Our boat was so well organised we had no idea where we wanted to go first. The decision made was a bad one. None of us were ready to be in the water at 7am, which was the official time competitors were allowed to start. We had not even reached a destination.

Another 15 minutes or so saw us jumping into the water and explore for some decent fish. Nada.

We decided to move on. Our next destination had about 5 other boats on the one reef. The spearos had invaded and the other fishermen knew better than to come near.

There was again a severe lack of fish. Ryan saw one big Spanish Mackerel that he missed by centimeters. As his team mate, I didn’t think that was good enough. He should really learn to aim better right? I was doing so much better. Not.

The rest of the day brought us pretty much the same conditions. The only thing that made us feel better was the radio and the constant complaining about lack of fish and lack of visibility in the water. We weren’t the only ones failing at this game.

The guy in the radio room made the helpful suggestion of driving out to New Caledonia. We contemplated it, but we would still be driving now.

Our boat of 4 divers brought in a few different reef fish, but nothing of significance.

On return to the boat ramp it was really fun to see the different fish brought back by various teams. Some had amazing catches, others we more like us. It was good to know that it was a particularly quiet day fish-wise.

Numerous fish were donated to the boat club, which were used to cook buffet dinner.

As the sun went down, the stillness of the evening was deceiving. 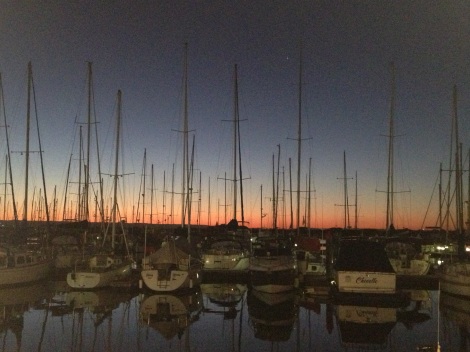 In about 6 hours the wind was going to blow up and ruin day #2 of the competition. It became a one day event and we spent the evening congratulating those who made those amazing catches; and eating the fish. It’s quite nice being able to hand your fish over and have it cooked.

It was kind of good that we had the Sunday off. It gave us time to clean up the boat and the gear. We were exhausted as it was, so I’m not sure I would have been upright for work on Monday had we competed on the Sunday.

For anyone with concerns about the mass killing of fish, the organizers made sure that we remained as sustainable as possible. There were specific rules about the types of fish that scored points, and only being able to weigh in one per species. That stopped people shooting as many fish as they possibly could. Sustainability at its best.

Now all those competitors have returned to their own towns up and down the East Coast. The fish of Moreton Island can be ours again!!