I’ve found that the majority of the time I have mentioned Laos there has been one of two reactions. Either, where is that? Or, that’s the place heaps of tourists die.

In recent times, I’ve found that people are more aware of the country’s existence, but only because of tragedies. The number 1 warning in the Lonely Planet when I travelled there two years ago was about the dangers of tubing in Vang Vieng and the fact that about 15 tourists die there every year. This has been expanded on by Australian media in recent years due to some further very unfortunate deaths involving Aussies. More recently, there was the plane crash involving Laos airlines.

The negative stigma attached to travelling to Laos causes me some frustration because it is such a wonderful country.

I travelled there with a group of girls, during a 5 week stint going through South East Asia in 2011. Two years ago this December! Wow time flies.

OK, so maybe the capital of Laos, Vientiane, does suck! It is the most boring capital city I have ever been to. But that definitely does not expand to the rest of the country. The only two things that I really remember as being interesting in Vientiane are the sunset and the Buddha park. 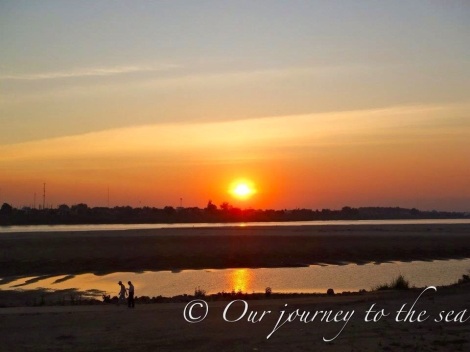 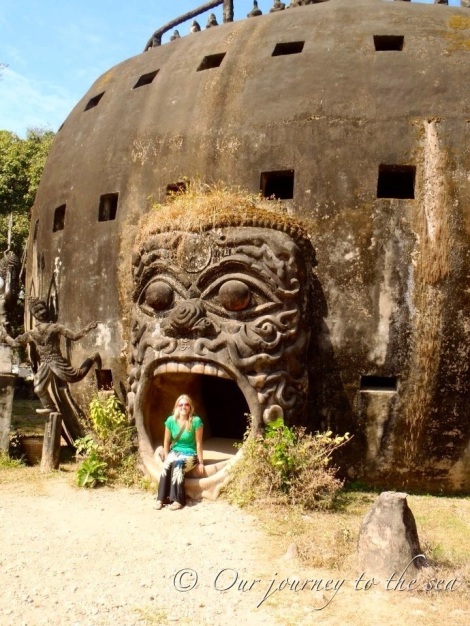 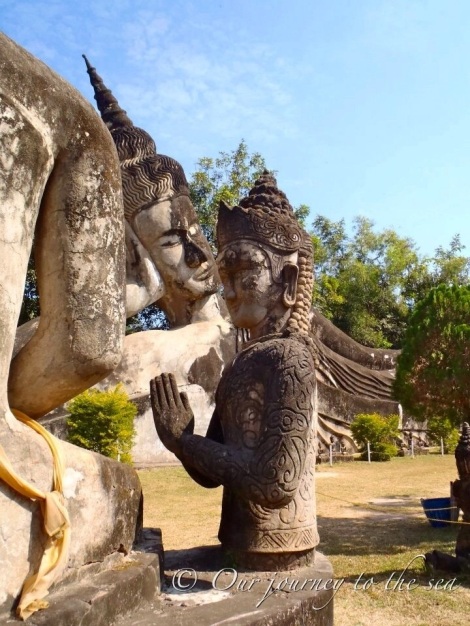 After two agonizing days in the world’s most boring town, there was no way the Lonely Planet could turn us off going through Vang Vieng. The drink-river-tubing capital of the world (as it then was).

The bus ride there was Majestic, going through the countryside and mountain ranges of Laos. Despite some slightly scary roads, and cliff edges, we made it in one piece.

The most surprising thing about Vang Vieng was its beauty. I did not for one minute expect it to be so awe inspiring. 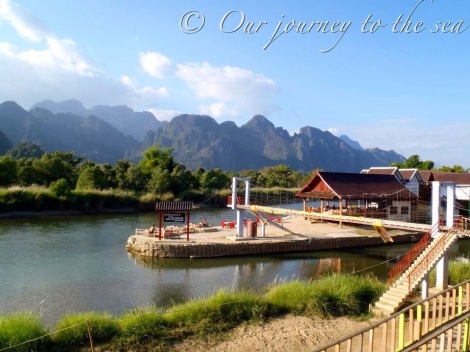 I don’t know whether to describe it as a sleepy town or a party town. Those who have been there would understand what I mean. All I can say is that the party aspect of things left us wanting more, so we extended our stay and participated in what Vang Vieng is known for. Tubing. If you google it, it won’t take long to find out what this is all about. 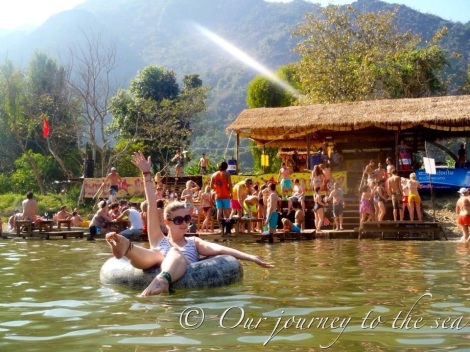 Yes we drank alcohol. No we didn’t die or get injured. We even flying foxed into the river. 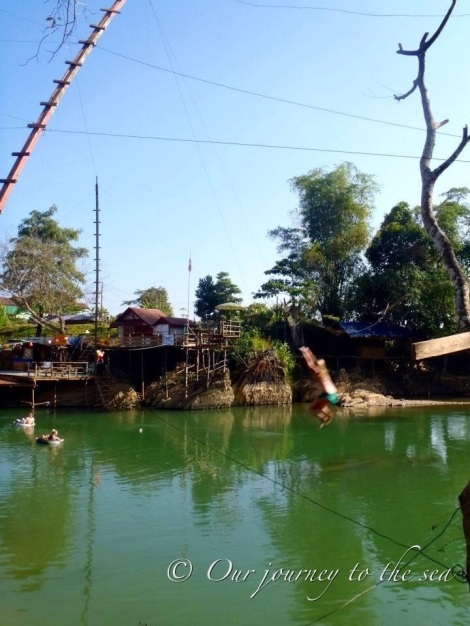 The issue with mixing alcohol with these sorts of activities is obvious. I guess we managed to use common sense, were all experienced swimmers and were able to check the river for any dangers before jumping in.

This post is not aimed at trying to defend the activities that went on or the dangers involved, but all I can say is that we had the time of our lives. It did become clear that we needed to leave because the constant diet of alcohol and street sub sandwiches, although delicious, was wreaking havoc on my digestive system!

Of course we didn’t leave before having a day of exploring the parts of Vang Vieng that didn’t involve partying. One day simply wasn’t enough and I wish we’d had more time to go explore the lakes and the caves some more. 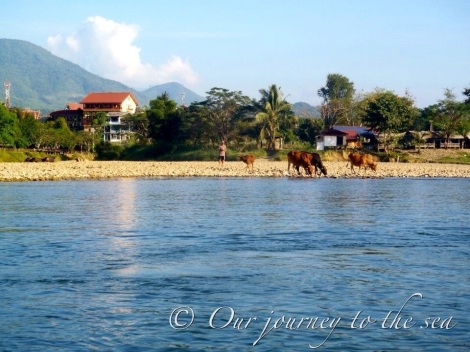 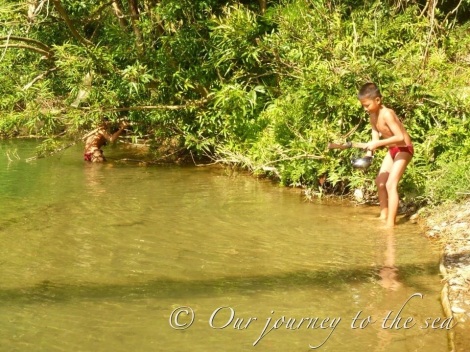 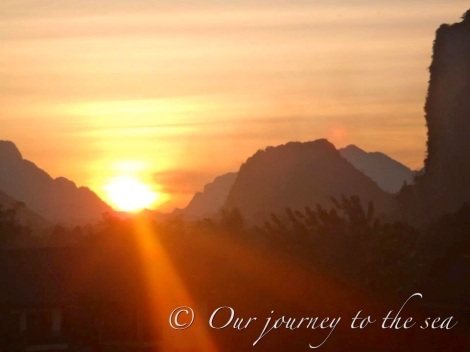 Luang Prabang. Now that is a beautiful place and full of culture! It also had wonderful markets. 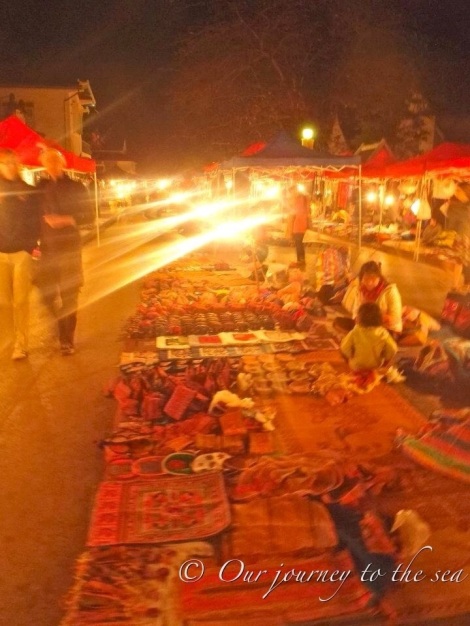 When travelling trough Asia, you tend to get a bit “marketed” out. The constant hassle of stall keepers trying to get you to buy things and bartering can be exhausting. There is no such thing as browsing. Except in Luang Prabang. The markets there are so mellow. Busy, but mellow. No one hassles you and the range is not as repetitive as other markets we visited in surrounding countries.

If you can manage to rise early, like we did on Christmas Day, you can also watch the Tak Bak. This is the Buddhist Monk collection of food from the locals at dawn. The locals line up with their sticky rice to offer to the Monks, who walk the streets in single file in the order of oldest to youngest. 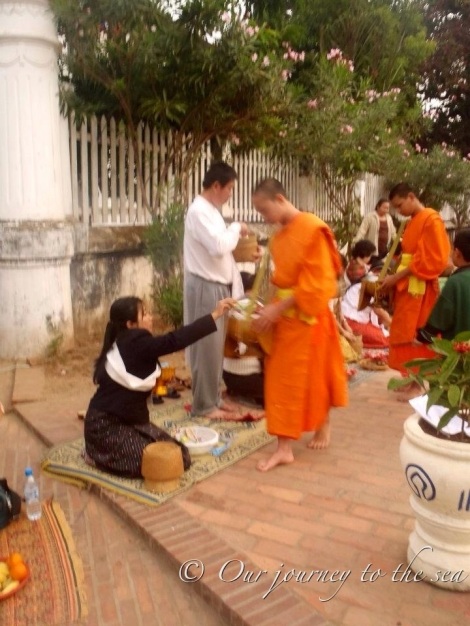 Given there are over 80 temples in Luang Prabang, hundreds of Monks arrive from every direction.

The only thing that can possibly ruin this tradition are the tourists who don’t realise the Monks are in meditation and tend to distract them or take flash photography (or both).

The areas surrounding Luang Prabang also offer an array of activities and natural beauties such as these waterfalls. 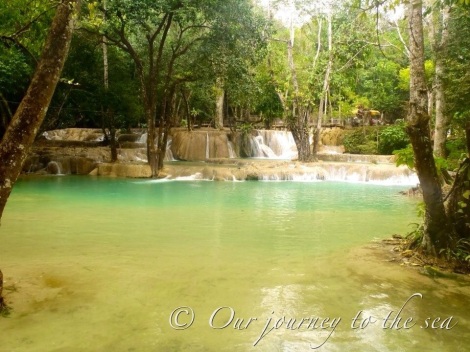 I’m not a guide book, so I’ll stop there. This is just my message to the online world asking potential travellers not to judge a place due to negative media.

I would love to return to Laos one day. There is so much more to explore and experience. The people were so lovely as well!

Have you been to Vang Vieng lately? What is it like since they apparently shut down the river bars?

What was your favourite part of Laos, if you have been there?

3 responses to “Have you heard of Laos?”