Straight after Christmas we packed he boat and set out to end our 2013 doing what we love best, being on the water.

The wind continued to change directions, so each day we moved around to anchorages that would keep us best protected. Unfortunately we were unable to get out spearfishing.

The first evening bought us a stunning sunset, which continued to change its colours.

After a few days, the forecast turned difficult. The winds were changing from north to south during the middle of the night, and there was also a chance of storms. We thought (briefly) about heading back into port, but then decided to head down towards the Gold Coast where the waterways are more protected. It seemed that every other boat in the bay also decided the same thing. We did manage to find an anchorage and enjoyed a scorching hot day before the first signs of a storm started to appear.

Well, not only one storm. Three storm cells formed out west and started to head in our direction. 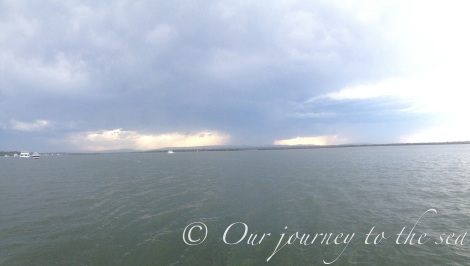 As they got closer, two cells joined and that super storm was supposed to land straight on us. However, in the end we were positioned exactly in between the two giant storms, watching an array of beautiful cloud formations. 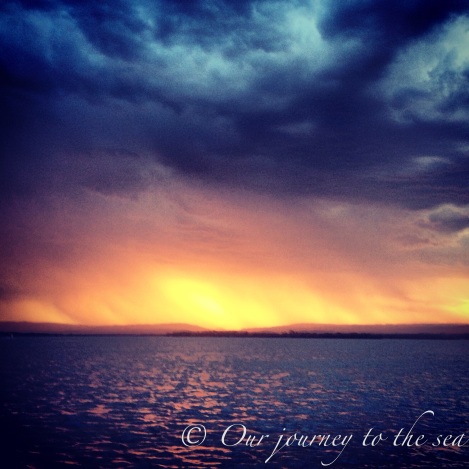 And lightning all around us.

It was an amazing show, with the swirly winds causing the boat to rotate around the anchor, giving us a 360 degree view of the various storms. Needless to say, the anchor chain was in all sorts of tangles by the next morning!

With a couple of days left in the year, we came back to land and joined friends in celebrating the start of 2014.

Wishing all of you a wonderful year ahead.

One response to “Ending 2013 on Moreton Bay”