Having Adam and Bek on board meant that we would end up drinking most nights. Having 2.5Euro 500ml beers whilst watching the Socceroos play Spain in Lakka was a must. The problem was that some Dutch people came to the same Taverna expecting to watch the Dutch game. “Australia didn’t even make it through” they said.

Lucky for us, this was the Taverna where we watched Australia play the Dutch, and the Taverna staff loved our cheering, which had attracted a crowd to their restaurant. So, they weren’t inclined to change the game over to the Dutch game, whilst the Aussies were playing and we were there to watch.

The Dutch people tried to get their way by buying enormous amounts of food. This meant that we had to keep on buying more beer. And more beer. After half time, we allowed a score check, and the Taverna owner quickly changed the channel back, leaving the Dutch unhappy and moving on to another Taverna. For once, we had a win, even if it wasn’t on the soccer (football) field.

We had also decided that we would go for the three course meal deal at the Italian restaurant that night, which involved more beers for the boys and wine for the girls. It’s a little unclear how we made it back to the boat that night. Leaving us feeling fantastic for the long sail down to Lefkas the next morning.

Somewhere along the way we had also managed to pick up a German guy named David, and invited him for the sail to Lefkas. He had never been sailing before. Unfortunately, the wind forecast became unfavourable and our headwind curse was back. David agreed that it was not the ideal day for him to come along, as we would be motoring instead of sailing. Lucky for us, an English guy who lived on the island took Ryan to the petrol station to fill up our jerry cans.

The last few hours of sailing into Lefkas were magnificent (sorry David). The winds turned to the right direction and we averaged a speed of 8 knots. Adam slept through it all.

After our amazing time quad biking around corfu, we decided to hire them again for Adam and Bek’s last day with us. In Lefkas, they were significantly cheaper, but none were available, so we settled for one scooter each. We lied our way to having one each, telling the man that we were all experienced scooter drivers. I had never been on one, and Bek had never driven one. Seeing the man’s face when Bek took off, riding over her own foot, was priceless!

We quickly became accustomed to riding, and were soon ready to circumnavigate the island. I lost the only map we had at our first stop for a late breakfast in Nidri. So, we just let someone take the lead and turn down any road they felt like. Adam brought us to Sivota, which had never been on our list for sailing to, but quickly became one of the must-do places. 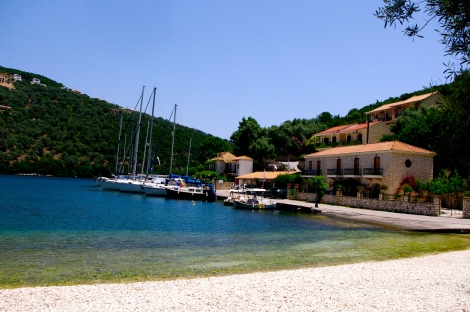 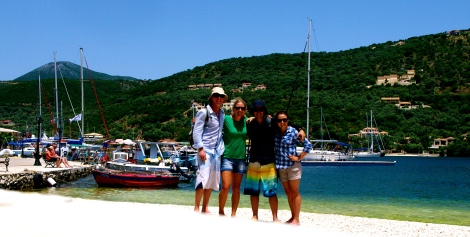 This was followed by the amazing find – Afteli Beach (as you saw on fabulous photo Friday).

Bek on her scooter 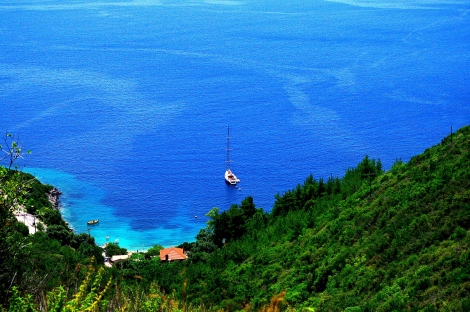 We were stoked to stumble across this paradise, and spent some time having quenching our thirst and swimming.

At the top of the hill, we could not resist the temptation to follow the signs to “Eden” despite the road being a rough, dirt, gravel track. The hire company would be mortified to know where we drove their scooters.

After a steep decent on some very loose gravel (basically sliding down the hill), we found Eden. Disappointingly, it was an exclusive villa hire property, with a beautiful swimming platform down on the rocks. Even though the sign said “Private” and “enter at your own risk” the boys entered the gate, to see if we could buy a drink at the bar, which was closed.

This caused a grumpy looking man to come outside and watch us from the balcony of one of the villas. Bek noticed him, just in time to turn on her scooter and drive it straight into the concrete fence of the property. The rest of us had not seen the man, and proceeded to cheer her on and give her high fives, whilst laughing our heads off and riding away.

We decided to continue along the dirt track, in avoidance of that gravelly slope that we had to encounter on the way back. After a short ride, we came across another swimming platform, clearly attached to some villas on the hill above us. The gate was open. There was no sign telling us entry was forbidden. The sound of four scooters buzzing up this peaceful track attracted a man to the top balcony of one of the villas.

We decided that someone like Tom Cruise was staying there and would want to avoid coming down to tell us to leave. We waved to the man, and imitated a swimming motion, pointing to the swimming platform. He did not smile, but he did not wave his arms at us telling us no. He just stood there having a cigarette, so we took that as a yes, and went down to use the platform. 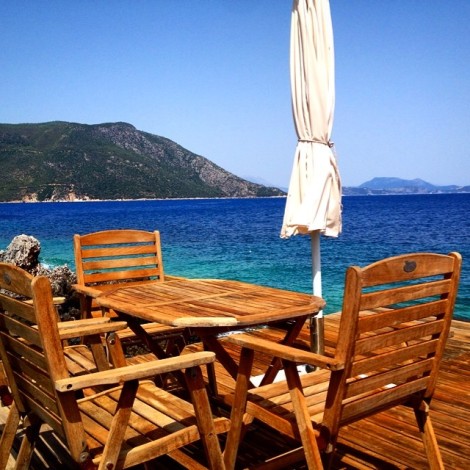 It was exhilarating knowing we were on an exclusive swimming platform above crystal clear Greek water, with Tom Cruise watching us from above thinking what gumption we had to use his own private swimming platform (OK, maybe it wasn’t Tom Cruise’s house, but it could have been?). We didn’t stay for too long, but rinsed off under his shower before getting back on our scooters towards the hill of gravel.

Bek and I gritted our teeth as we put the throttle on and aimed straight up the hill, high fiving all around when we all made it safely.

We spent the rest of the day on normal roads, taking in the wonderful scents the island had to offer. The smells were unbelievable, swapping from wild flowers and wild herbs to pine trees. Sometimes with a whiff of petrol from the scooter in front.

We also stopped for an impromptu winery tour, where we tasted some local wines. They pretty much tasted the same as our wine man in Lefkas Town, and we still had plenty of stocks to get us through. Seeing the small machines used to make and bottle the wines was pretty cool, and nice to see a small winery keeping up good business. 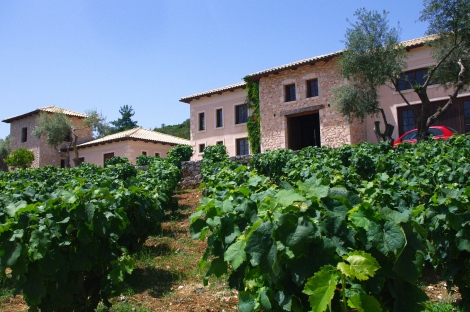 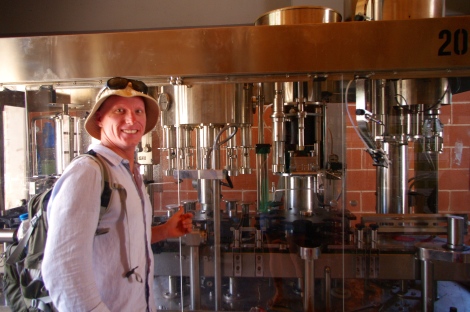 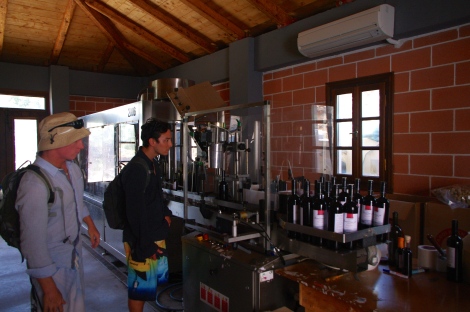 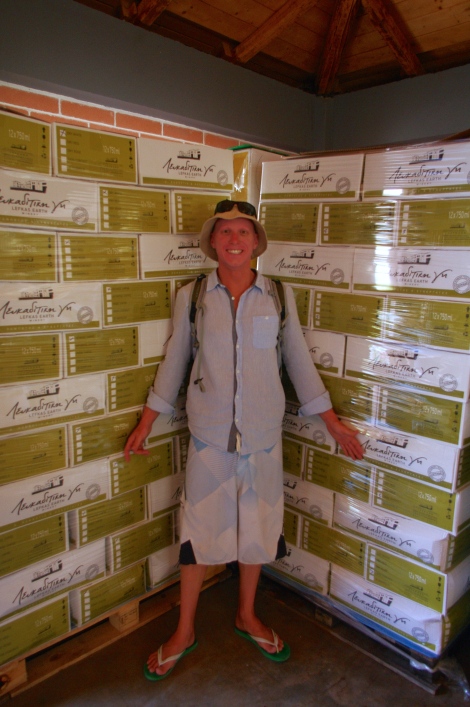 We handed back our scooters, ready to have one last night with our guests on board. This was cause for a search for happy hour cocktails. We spent about an hour walking around the entire town searching for 5 Euro cocktails, only to remember that the Pirate Bar about 100 meters away from our boat did them. We arrived there an hour late so decided to go to a bar right next to our boat and pay full price, only to find out they would not make cocktails for another hour and their draught beer was unavailable. Sigh.

So we went to the very first bar we had checked out on our long walk around town, and settled for full price daiquiris. They were delicious. This led into some quasi-sangria making on the boat, with a dinner of fajitas and then hours of playing the card game 500, girls versus boys. One game went until 2am, because neither team was willing to give up or let the others win. Eventually the girls won and it was time to go to bed.

Unfortunately, the bar near our boat decided to party until 6am, keeping most of us awake the rest of the night. We woke up feeling rather sorry for ourselves and very sad to say goodbye to our friends.

If you are interested in the adventures of Bek and Adam, they are 6 months into their travelling adventure. You can follow them here.

Then came a day of breaking things!!! Firstly, the headwind curse was still hanging around, with fairly strong winds coming from where we wanted to go. We were also being blown on to the boat next door, making the exit from the town quay quite difficult.

Before even taking off, the fuel line to the motor broke. Ryan got out with his trusty swiss army knife and fixed that. We were ready to go, knowing that we would have to do so in a hurry to avoid colliding with the boat next door. I quickly started cranking the anchor, given it was on too tight for me to pull up by hand. I failed to notice that a rope tied to the cleat next to the anchor chain had caught on the locking mechanism, twisting on harder and harder the more I cranked. I was getting frustrated at how difficult the anchor was to get up, knowing I had to do it in a hurry.

Then I realized. **Insert swearing here** I somehow managed to get the rope loose and the anchor up. After this little scenario, the one rope became two, as I had almost ripped through it.

In the rush to get the anchor up, I did not have time to worry about the mud covering the boat from the chain. Whilst we motored down the Lefkas canal I decided to use a bucket to try and get rid of the wet mud, rather than letting it dry and having to scrub it later. So then the handle to the bucket broke. I called man overboard, knowing that we would be unable to turn around inside the canal to retrieve it. Sigh.

As we exited the canal, Ryan turned around with a puzzled look on his face. The steering cable attached to the motor had broken. Sigh.

Ryan quickly fixed that, and we were eager to get to Tranquil Bay as soon as possible to avoid any further mishaps. Nothing else went wrong, and we settled into a nice little spot, running long lines to shore, me basically rock climbing to get them around the base of a tree.

We were there nice and early, which meant that we could enjoy an afternoon of relaxation and tranquility, winding down from an awesome 10 days with our guests. Wind down we did. Reading and napping as we waited for nighttime to go to bed. As soon as the sun was down we were in bed, ready for a good night sleep.

Wrong. Those damned mosquitos somehow made it back into our cabin and annoyed us all night long!!!! Sigh.

We got our good night sleep in Sivota the next night, which is extremely peaceful for the number of boats that stay there. This was after celebrating having been on the boat for one whole month already!!! We found two different happy hours and came back to the boat quite happy, watching the sun go down so that we could go to bed.

And then we ended up in Vasiliki, the watersports haven. I don’t think I had ever seen so many windsurfers in one place. There must be hundreds of them out there. Again, this place is paradise. The shore is lined with colourful tavernas, the water is turquoise blue, the beach is white and the town quay is small enough to make it quite peaceful.