The night we spent in Lakka was quite loud with the wind howling. Luckily we were moored in a spot well protected from any swell or chop. I just remember thinking (and it seems the others on board thought the same thing) that having the same wind the next day would be perfect.

We had all made the decision that we would go straight from Lakka to Fiskardho, a distance of over 50 nautical miles. On that boat, with the motor we had, it was a long distance to just be motoring. Ryan and I had decided that if the wind did not pick up in time, we would divert towards Lefkas, which would result in our guests missing out on one extra day of sailing.

We set off on the Western side of Nisos Paxos, motoring at 5 knots, eager for the wind to arrive. It seems the overnight wind had disappeared. After about an hour or two wind started to set in. We immediately set the sails and motor sailed for a short while, until the wind turned further North. Seeing as we were heading South, it meant that we could set the spinnaker, to Ryan’s satisfaction. 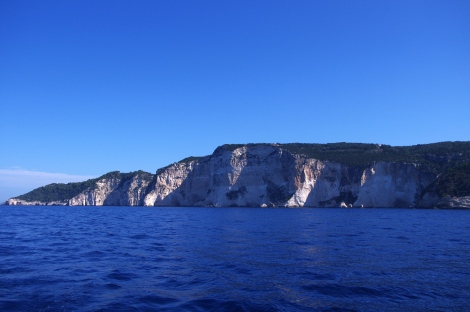 The Western side of Paxos

Our guests enjoying a sail

With the spinnaker set, we could avoid using the motor, and reached speeds of up to 8 knots, which was nice in the light winds. After about 25 – 30 nautical miles, the wind turned too beam on, and we had to stop with the spinnaker. The wind then decided to die off, making us have to motor sail the rest of the way. It was a shame, because riding the waves and sailing is so much more peaceful than having the exhausting hum of the motor.

Given Fiskardho is one of the most popular places for yachts, we were quite nervous about arriving late. We did not have high hopes of finding a spot inside the harbour, and hoped that somewhere on the outskirts would be suitable, but close enough for us to row in with the dinghy.

We arrived at 7:30pm and to our surprise our usual spot inside the harbour was free, with plenty of space to choose from. I’m not sure what happened, but because it gets quite shallow, maybe no one wanted to try going there, even though any yacht can fit there with long lines to the quay. It was great to know we would not have a long dinghy ride to dinner that night. 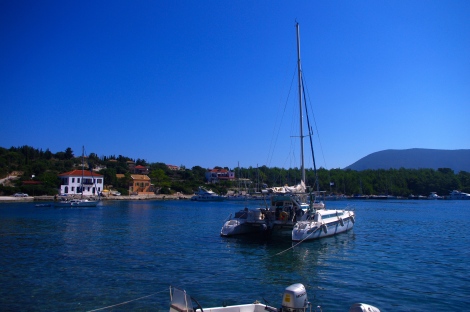 Sibia in her own spot, no neighbours, right in the middle of the harbour

Soon after our arrival, we were seated at Ellis restaurant for a delicious meal. The long day of sailing had taken it out of us, so we went to bed rather than joining in where ever the music was coming from during the night. The next morning we took some time out to walk around the town, get some fresh produce and bread, and try on funky sunglasses.

We did not have to go far, with Kioni being our next destination. The intention was to stop in a bay on the way for a swim. However, we also wanted to sail there rather than motor, and the wind was not playing entirely nice. It kept us moving, but very slowly. A decision was made to swim behind the very slow moving boat rather than stop in a bay. Ryan and I were nervous about finding a mooring in Kioni if we arrived too late, despite our luck the night before. Sometimes you just get a gut feeling and you have to go with it.

It was extremely lucky that we followed our gut. When we arrived, we found the perfect spot and at first it appeared that we had been concerned for no reason. Within an hour, the entrance to the harbour was absolutely packed with yachts racing in to find a position. We breathed a sigh of relief and settled in to watch the chaos.

One of the very first boats to come in behind us had tried to set a stern anchor and go bows to the boats already moored on the town quay. They had friends there who agreed to let them tie on. However, it all went bad when they collected someone else’s anchor in the process, then dragged sideways, getting all tangled. Some of the sailing holidays crew were dinghying around finding spots for their boats, and in between tried to assist the ladies on board that boat. However, all failed and we watched for a long time until we realised they needed some extra help.

Ryan grabbed his diving fins and mask, and we rowed over to them with our dinghy. They were grateful for the assistance, and within about 5 minutes we had them released and on their way. It did not deter them from trying for the same mooring, and the second time was successful. Although I had been aching to have a nap, I could not stop watching the chaos in the harbour. Not long after we released the tangled anchor, another boat managed to get tangled in a similar fashion. Luckily they fixed the issue without our assistance.

Chris and Micheline were like me, and could not keep their eyes away from the goings on of the harbour.

That evening we returned to the Calypso restaurant because it had been so nice on the previous occasion. It was great again, but for some reason made Ryan sick that night. We had eaten all of the same food during that day, so we are not sure what did it. He was better by morning.

The wind blew early on, and we set sail to One House Bay for a midday swim and lunch. It was a very quick sail there thanks to the wind. However, that same wind also made the anchorage a bit uncomfortable. We stayed anyway, and enjoyed a swim in the beautiful clear water. It was there that we invented a rock target game, where one person throws a large rock in the air and the others try to hit it with smaller rocks as it flies. After many misses, and near rock injuries, I won. No big deal.

We ate a nice Greek salad on board, whilst watching some more chaos in the bay. Many boats had wanted to stop there, but most struggled to anchor due to the wind and some weed on the bottom. Others tangled their anchors and provided some lunch time entertainment. It did not take long for us to leave the chaos, and set sail towards Kastos.

It was a wonderfully smooth and fast sail all of the way there. It seems that our Swiss guests brought some great winds with them. We arrived in Kastos nice and early. the harbour was well protected from the wind, and we could enjoy a nice afternoon swim followed by evening drinks at the windmill.

We were there long enough to enjoy the stunning sunset.

Looking towards the harbour from the windmill window

The evening was then spent at Chef John’s restaurant, where the meals were not as good as the previous time, and expensive. Though the company was nice.

The next day involved visiting a few spots, given it was our last opportunity to show our guests some of the best locations we had found. The first stop was our swimming bay, which doesn’t appear to have a name, on the South Western side of Kalomos. This is where I won our second game of rock target. No big deal. 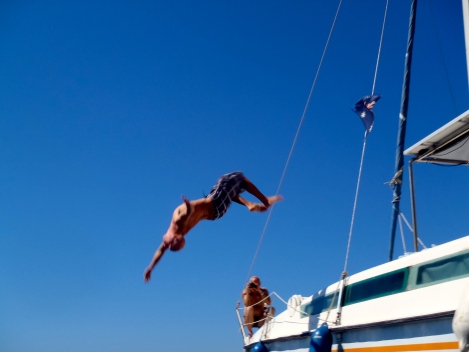 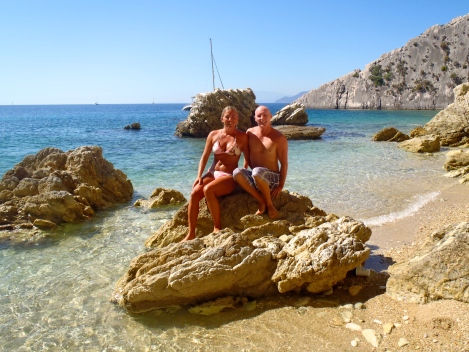 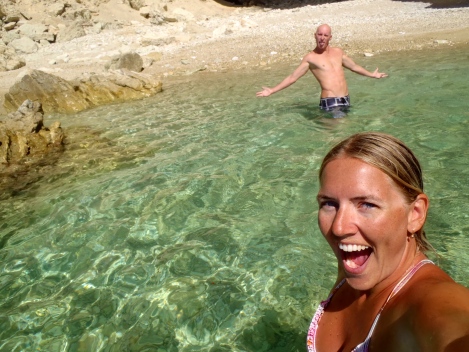 look at that clear water!

Then we motored around the corner to Porto Leone, the abandoned town. This was somewhere my dad really wanted to visit, and not too far off the direction we needed to go. We also thought it would make a good lunch stop. Whilst I made lunch, Chris and Micheline went to explore the town and the ancient trees. I spent most of the time trying to kill the swarm of wasps trying to eat our lunch. The wasp bat had been very handy indeed.

We did not stay there to eat lunch, and instead ate it whilst underway to Marathias Bay. It was a great sail for about half the distance, until the wind died and we had to motor on to the destination that became a favourite for Chris and Micheline, and was already one of ours. 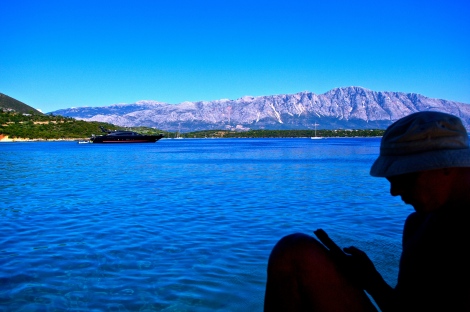 Of course we had to go in to the beach bar for happy hour drinks. Unfortunately we found out that the self-serve souvlaki stand only opened on weekends. This was something we had all been looking forward to, but at least we had room for the pasta dinner on board the boat. It was a beautiful evening, sunset and a night under the stars. It’s always beautiful to watch the stars when everything around you is dark and peaceful.

Absolute tranquility before heading back to Lefkas, which is beautiful but a whole lot busier. And hotter. So much hotter.

Of course we had to introduce our guests to happy hour at the pirate bar. After a few drinks there, I dragged Ryan to the other side of town where we could see the sunset from the bridge. The other two came willingly, and it seems my obsession with taking photos of sunsets is genetic. 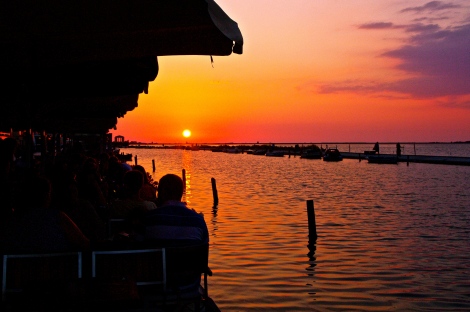 Being in Lefkas, the only place we could bring ourselves to eat dinner was Regantos Taverna. This family owned Taverna really is the place for good Greek food in Lefkas. 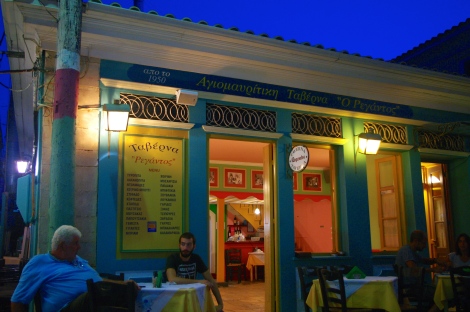 And that was the end of the week with our guests on board. We brought them to the train station the next day and started our very last week in Greece!!!